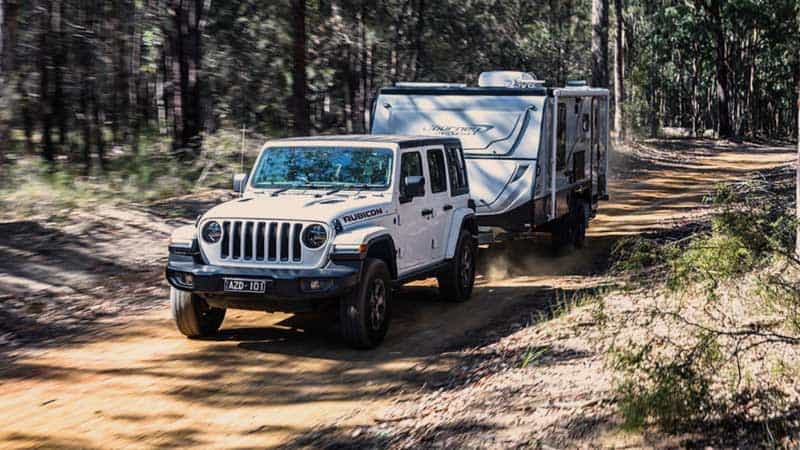 If you are reading this article, chances are you already own a wrangler or are planning to own one. The Jeep wranglers were the epitome of off-road pickup style trucks when they were introduced back in 1986. They weren't a pickup truck or an off-road Jeep, as earlier models had been. Rather they were an amalgamation of modern looks and the reliability of Jeep.

Jeep wranglers weren’t designed specifically for towing. Rather it was an additional feature to a compact SUV. It could carry trailers, boats, pickups, and basically any standard payload. As we mentioned, the features and ability of the wrangler were unlike anything of those times.

But with modern times came newer challenges. What was a breakthrough tech in 1986 is yesterday’s tech today. So, has the towing capacity improved over the years? Is Jeep still the undisputed king of off-road towing? And most importantly, does the towing capacity differ from model to model? Jeep has introduced a number of wranglers since its inception.

In this article, we will take a deep dive into each of the models and see which one pulls the best for your needs.

The answer to the main question here is pretty simple. How much can it tow? A one-line answer would be that a 2021 Jeep Wrangler can tow up to 3500 lbs. But that’s just a part of the information. Surely no one would go buy the latest wrangler just for its towing capacity. Some pre-wrangler Jeeps can tow better than that. On older versions, some modifications can be made to increase towing capability dramatically.

It's about how much is the towing limit. And if you’re already a Wrangler owner, it's about understanding the optimum load for different engine configurations. We will discuss that in detail in the latter part of the article. 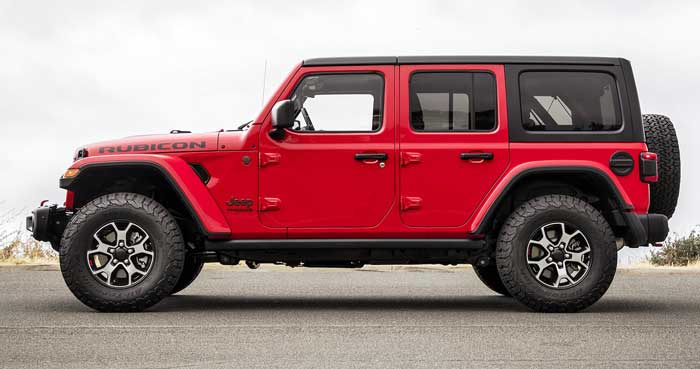 But first, let's talk about the wrangler itself. The wranglers were the successor to the highly successful Jeep CJ. The Jeep CJ or “Civilian Jeep,” as it was known, was in production for four decades. It started production in 1944 and continued till 1986.

The CJs were the true open-bodied, off-road vehicle meant to combine the functionality of a pickup truck in a compact form factor. And it did so with preciseness. Though the early CJ models weren’t meant for towing, the models after the 70s saw towing additions. The CJs had a moderate 1400 lbs. of towing capacity, which carried onto the earliest wrangler models.

Coming back to the wrangler, it was a much-needed refreshment on the already popular CJ models. The complete overhaul saw some noticeable changes. The pickup, as well as the front cabin, now had roofs. All-wheel drive was introduced in the Wrangler era, along with the introduction of the 4-door models. The different Wrangler models have different towing capacities. Each of the models is discussed in detail below.

The first Wrangler model was the YJ which lasted from 1987 to 1996. It was pitched as a significant rebrand of the CJ though it retained much of the CJ design and build elements. The carriage frame changed, and the ground clearance also reduced significantly in the YJ.

The YJ Wrangler was a convertible that didn’t look out of place on city roads. Rather the convertible frame allowed for the 2-door model to be converted into a fully functional SUV. 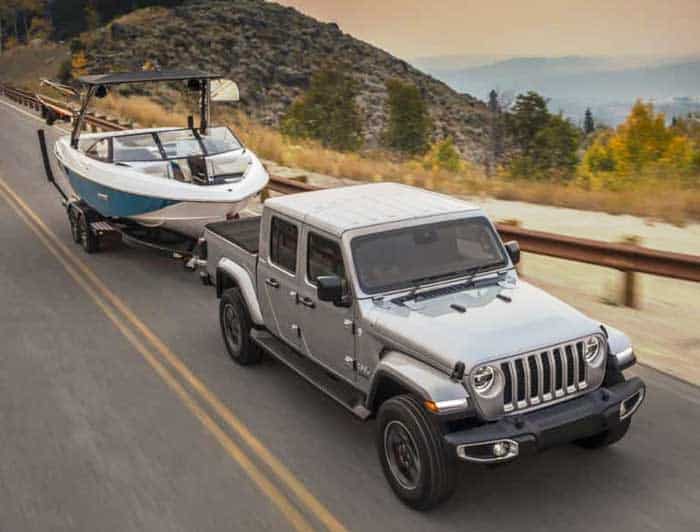 The towing capabilities of the Wrangler YJ didn’t improve at all because of the similar form factor and internals.

The Wrangler YJ holds a towing capacity of 2000 lbs.

The Wrangler TJ was the direct successor to the YJ line. It was introduced in 1996 and lasted through 2006. It brought some refinement over the YJ and CJ. The most notable change was the shift to the iconic round headlights of Jeep. Though Jeep was yet to introduce a 4-door model with the TJ line, it saw a proper SUV makeover with both fixed and convertible options. 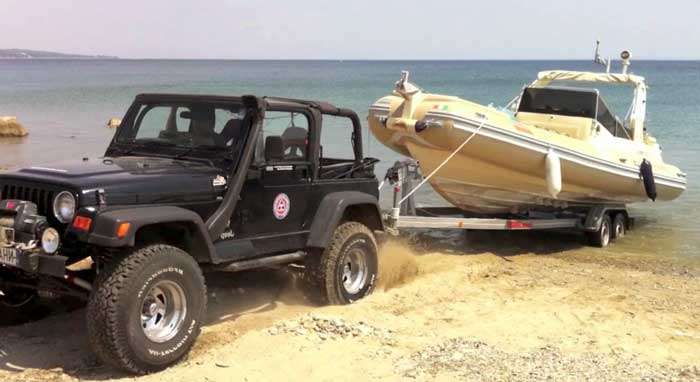 However, Jeep introduced a long-wheelbase TJ model called “Unlimited.” It allowed for their highest ever towing capacity of 5000 lbs.

The Wrangler JK is the third iteration of the Wrangler and the successor of the TJ line. The JK line was in production from 2006 to 2018. This is the first time that Jeep introduced the 4-door options in the Wrangler series.

The 2-door and 4-door both came in either the SUV or convertible configuration. The towing capacity of the 2-door remained the same at 2000 lbs. But it went up to 3500 lbs. for the 4-door variant. 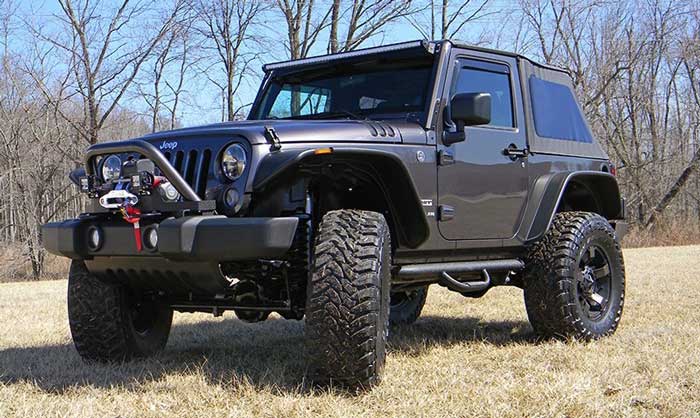 Jeep also had a similar ‘Unlimited” model for the JK line. Just like the TJ, it can tow up to 5000 lbs. of carriage.

The Wrangler JL was first introduced in 2018, and it has been the latest and greatest in the Wrangler line ever since. It retains the choice for either 2-door or 4-door SUV along with a convertible option. The engine took a significant jump with eight different choice options. The highest performance edition has a 6.4 L Hemi V8 engine. 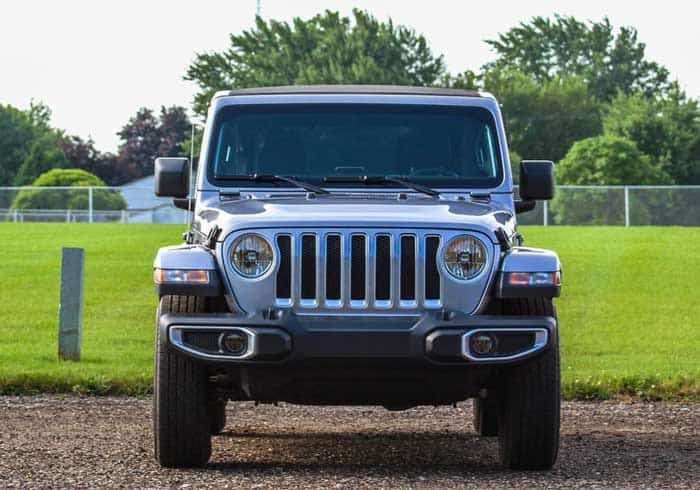 The design and comfortability also saw a huge upgrade. The JL comes in six different designs. The latest addition to it is the Rubicon 392, which was made available for 2022.

But the towing capacity across the models remains the same at 3500 lbs.

Why Do the Jeep Wranglers Have Low Towing Capacity?

This is a question that will probably come to anyone’s mind reading this article. Any standard mid-range pick-up truck can tow anywhere between 7000 to 11000 lbs. At the same time, a standard Jeep Wrangler model can tow a max of 3500 lbs. that too on the newer models. The “unlimited” model can go up to 5000 lbs. and that is the max for any Wrangler.

Firstly, there are a couple of things that determine the towing capacity. They are the engine and the Wheelbase. The engines powering the Wrangler cannot create the static push on a 4WD for a larger haul. The Jeep Wranglers were not meant to be tow trucks. Rather it was a hybrid 4WD that was a cross between an off-roader and a daily driver. The Wrangler model has a distinct low ground clearance and smaller wheelbase. 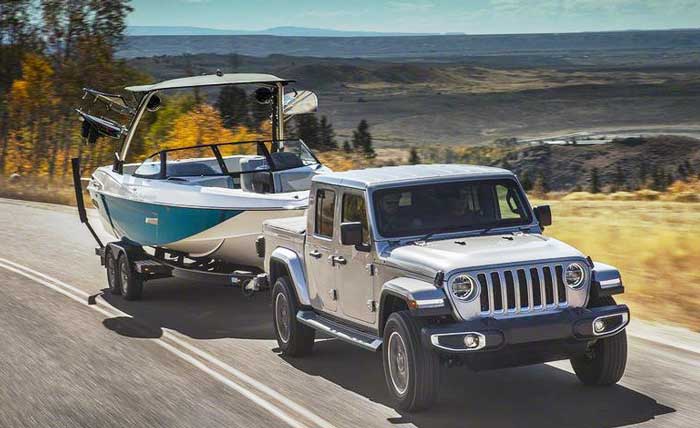 That is what makes the ride so compact. But that comes at the cost of reduced towing capacity. As you may have guessed, the Unlimited Wrangler has the largest wheelbase among all the models.

How to Increase the Towing Capacity of Jeep Wranglers?

Let us clear up some things upfront. You cannot increase the towing power on a Jeep Wrangler without significantly reengineering the Jeep. The slated upper limit is all you are getting. And some veteran Jeep owners suggest towing 500 lbs. less than the max capacity. Why? Because the max payload is slated for a controlled condition like a standard level road or a specific engine setup. 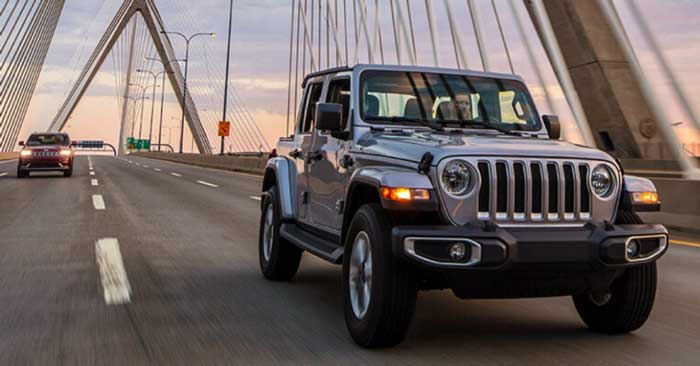 The tow hitch is what connects the payload with the Jeep Wrangler. To increase the capacity, you need to spend some extra and get a weight-distributed hitch. This tiny modification can work to increase the towing capacity by a couple of quarters.

The standard brakes that come with the Wranglers aren’t slated to hold payloads beyond a certain limit. If the brakes are swapped with high-intensity ones, it can help to increase the towing capacity. 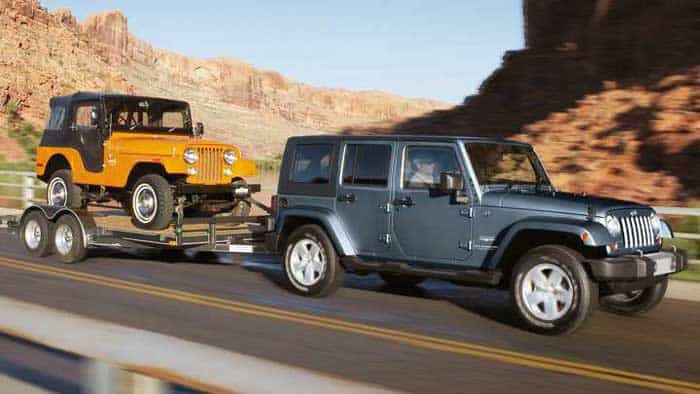 The Wrangler engines come with a set of limits. The performance of the engines is capped at a certain level considering their compact size. An after-market programmer can help to unlock more power for the engine and hence more towing capability.

The issue with each of these stages is that they will necessitate considerable alterations that Jeep does not suggest.

Also, these aren't DIY, so you will need professional assistance should you choose these methods.

That’s all on the towing capacity of Jeep Wrangler folks. The Jeep Wranglers gained immense popularity for their consistency and compact design. It's an all-terrain, all-weather ride that is enjoyed by many. Unfortunately, the Jeep Wranglers aren't slated to be the best towers.

However, you can still tow away a light camper for those summer camps with family. We hope this article helped you understand everything regarding towing ability of Wranglers. Just make sure you buy the right Wrangler for your need.

How to Take The Doors Off a Jeep?
Top Reasons Why Jeep Wranglers Hold Their Value
What Exactly is a Jeep’s Reliability Level?
The Perfect Coolant For Jeep Grand Cherokee: All You Need To Know About.
Should You Paint Your Jeep Wrangler? How Much Does It Cost?