Technology for pollution-free “electric flight” is being evaluated in a number of NASA Glenn Research Center programs. One approach is to drive propulsive fans or propellers with electric motors powered by fuel cells running on hydrogen. For large transport aircraft, conventional electric motors are far too heavy to be feasible. However, since hydrogen fuel would almost surely be carried as liquid, a propulsive electric motor could be cooled to near liquid hydrogen temperature (-423 °F) by using the fuel for cooling before it goes to the fuel cells.

Motor windings could be either superconducting or high-purity normal copper or aluminum. The electrical resistance of pure metals can drop to 1/100th or less of their room-temperature resistance at liquid hydrogen temperature. In either case, super or normal, much higher current density is possible in motor windings.

This leads to more compact motors that are projected to produce 20 hp/lb or more in large sizes, in comparison to on the order of 2 hp/lb for large conventional motors. High power density is the major goal. To support cryogenic motor development, we have designed and built in-house a small motor (7-in. outside diameter) for operation in liquid nitrogen. 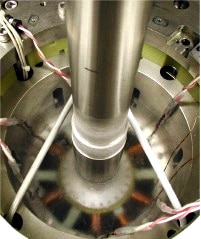 Switched reluctance motor submerged in liquid nitrogen (with 6 of 12 motor coils and a sensor coil installed).

Upgrading the power conditioning will extend the high torque produced at low rpm to higher rpm. This will markedly increase the power production (and hence the specific power). The present limits of 160 V and 30 A per phase will be increased to 300 V and 100 A per phase in the first upgrade stage. A factor of 4 or more increase in power (from 14 kW) is predicted in the upgraded configuration.

The motor serves two purposes. It is a test bed for special motor winding configurations, and it will validate structural, electromagnetic, and heat transfer analysis and design procedures that can subsequently be applied to liquid-hydrogen-cooled motors.